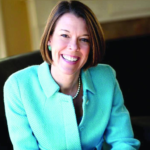 Hill, senior vice president and general counsel for Citizens Energy Group, joined Citizens in 2013. Previously, she had been a partner at the law firm of Faegre Baker Daniels (now Faegre Drinker Biddle & Reath LLC) where she had worked since 2001. Prior to joining the firm, she worked for the former Indiana Supreme Court justice and current Indiana University Robert H. McKinney School of Law professor of practice, Frank Sullivan, Jr.

While practicing nonprofit and tax-exempt law at Faegre Baker Daniels, Hill also provided legal and business guidance in the areas of corporate governance, intellectual property, the internet and privacy matters. The daughter of a U.S. Army officer, Hill led her law firm’s efforts in creating the Indiana Lawyers for Soldiers program, which offers pro bono legal services to deployed Indiana National Guard members and their families.

A graduate of DePauw University (’85) and the IU McKinney School of Law, Hill is a member of the boards of the Allen Whitehill Clowes Charitable Foundation, Inc., Arthur Jordan Foundation, Indiana Energy Association and Riley Children’s Foundation. She is a past board member of Eskenazi Health Center, Indianapolis Neighborhood Housing Partnership and Center for Leadership Development, among several other charitable organizations. She is a member of The American Law Institute, the leading independent organization that produces scholarly work to clarify, modernize and otherwise improve the law. Before launching her law career, Hill worked at IBM for more than a decade in a variety of positions, including systems engineer, systems design consultant and regional manager.

“With her keen intellect, impeccable character, relevant experience and gracious manner, Jennett will be a valuable addition to the Endowment’s leadership team,” Robbins said. “Her commitments to her faith and to furthering the aims and values of the Endowment’s founders in contemporary contexts will serve well the Endowment and the causes it seeks to advance. I am most eager for her to begin her new role at the Endowment early next year.”

About Lilly Endowment Inc.
Lilly Endowment Inc. is an Indianapolis-based, private philanthropic foundation created in 1937 by J.K. Lilly and his sons, Eli and J.K. Jr., through gifts of stock in their pharmaceutical business, Eli Lilly and Company. While those gifts remain the financial bedrock of the Endowment, the Endowment is a separate entity from the company, with a distinct governing board, staff and location. In keeping with its founders’ wishes, the Endowment supports the causes of community development, education and religion. The Endowment funds programs throughout the United States, especially in the field of religion. It maintains a special commitment to its hometown, Indianapolis, and home state, Indiana.